Shakti’s yoga practice was inspired at an early age by Lilias Folan, the “First Lady of American Yoga”, and Richard Hittleman, who brought “yoga” into 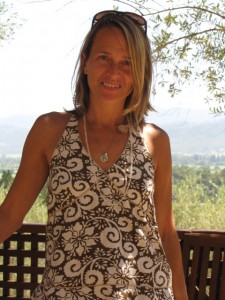 American life in the 1960s and 70s.  She began studying yoga seriously in 1995 when she worked with teacher Jane Houck in Fort Collins, Colorado, and participated in numerous Ashtanga and Iyengar yoga workshops in Fort Collins and Boulder.

In February 1999, Shakti completed the Yoga Teacher’s Training Course at the Sivananda Ashram on Paradise Island, Bahamas. This course is an intensive four-week training course that follows the traditional Indian system of Gurukula, in which the student lives with the teacher in an Ashram (Yoga and meditation center). Closely supervised by the swamis and teachers, the student works physically and mentally and acquires the full experience of Yoga, which will later be transmitted to others. Shakti found that the Sivananda Yoga Training was the definitive yoga practice for her. Named “Shakti” by her teacher Swami Durgananda, she continues to explore and share the divine energy that embodies her yoga practice. Shakti has taught Sivananda based yoga classes in Colorado, California, and Hawaii.

In 2010, she created “Prana Veda Yoga and Ayurveda”, now based in Davis, California. She works with individuals and leads workshops, teaching the principles of Ayurveda to those who long for balanced physical and emotional health. Her years of environmental technical writing (simplifying complicated subject matter) have translated into the ability to present the science of Ayurveda to even those with no background in Yoga. Combining her Ayurvedic training, her background in the environmental field and a lifetime of communing with nature, Shakti has a holistic, whole-earth approach to living sustainably with our bodies and our environment.